So it needs to be frozen. This is, after all, why I bought a freezer when I planted the garden. That and it’s good for storing dog foods.

So, I had quite a few zucchini (or courgettes as they call t hem here. Don’t know why they call them that, but they do). This isn’t even all of them. I filled up this bowl even further and had one left over. I’ll eat fresh ones until there aren’t any more, but every time they build up I’ll store them.

I was also making corn (it’s corn season and cheap at the store), so was boiling extra water. Basically, bring some water to a boil. Enough for all your zucchini. I didn’t do that so ended up needing to use the corn water as I filled up both pots to overflowing. I had to tip water out to fit more zucchini in. 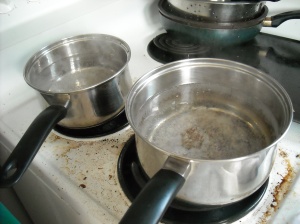 Once the water is boiling, add the zucchini and keep in there for 3 minutes. Don’t bother waiting for it to boil again, just 3 minutes immersed in the water should be good. So said the guides to blanching zucchini. We’ll just see how these taste later on…(Yeah, the stove is dirty, needs a steel wool scrub)

I ended up with 6 of those little containers at the back (we get them from a takeaway curry place, we have 12, but I use them for tomato sauce too),  and the rest in a 2L container that isn’t quite full. I anticipate putting more on top once I get overwhelmed with vegetables again. The little containers hold more than a cup but not quite 2 cups I think. These zucchini will supposedly be acceptable for stir fry (mainly how I eat them) or anywhere I’d use sliced zucchinis. I guess I could have grated them and frozen them straight like that (good for zucchini bread, zucchini-latkes or mixing into other things).

This entry was posted on Sunday, January 31st, 2010 at 10:55 am and posted in Garden related, Miscellany. You can follow any responses to this entry through the RSS 2.0 feed.
« Monster garden
Tomato armageddon »

One response to “Too much zucchini!”