That’s always what I called it, but just it’s basic potato leek soup.

There are always leeks and potatoes at the store so why not?

I made some chickeny broth with a chicken leg, water and olive oil. Into the slow cooker and let simmer for a bit. 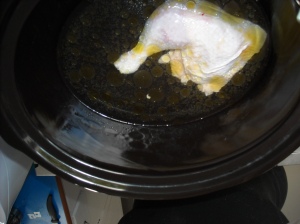 It’s at a really funny angle as the crockpot is above my eye level where it sits now. So I’m kind of holding the camera up and above but angled toward me.

I used these red ones. I have two types right now. These and potatoes that need serious scrubbing. I was lazy.

I bought a 3 pack, but only ended up putting one in. The other two are awaiting future use, all sliced up, in the freezer.

Milk and more water to make a soup:

In the past I’ve used cream, cream and butter, milk and butter, and just milk. This time is just full fat milk (I generally have some on hand. I seem to need a lot of it when before I wasn’t a milk drinker at all). Who knows how much this is. Just add until it looks suitably milky.

I guess I should mention I threw some rosemary in there also. And salt.

This is after some fork mashing of the potatoes (I has no hand blender).

About half of it is frozen (part of the nesting I guess.) Food for later!

Comments Off on Leaky potato soup | posted in Slow cooker

That should be the title of a horror movie.

I think I’m starting to get it. I have some baby clothing and a bunch of new reusable diapers (nappies, may have to get used to saying that) that I’ve bought over the course of the pregnancy so far and I’ve been wanting to wash them. I was waiting until we moved so I could go from washing to setting them up, but here it is April (October for your N Hemisphere people) and we are just moving next week. So I took advantage of the nice weather over Easter weekend and just washed them all. The baby clothing was pretty straightforward, but the diapers need to be washed 3-5 times before use to build up absorbency. So that took a bit of time.

But they looked really nice hanging out on the line. 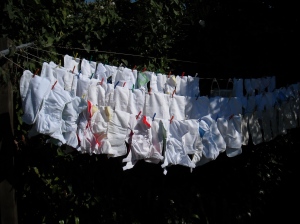 I’m disproportionately excited about them. I looked around a bit and bought these new. They should work from birth to 2ish (through a clever arrangement of snaps and velcro) and have several strengths of inserts (to soak the wet) that go on the inside (you can’t see but they have a pocket to put the soaker parts). Reusuable diaper technology is fairly advanced these days.

Anyhow, enough baby prattle. Even though that’s what I’m mainly doing. Got stuffs to buy still, but less than 3 months to go.

Comments Off on The nesting | posted in Miscellany, Thoughts